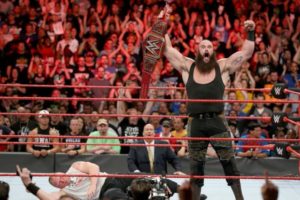 8. Braun Strowman – “THE MONSTER AMONG MEN!” has become a viable opponent in 2017. Not only has he shed the skin of a member of the Wyatt family (see The Bludgeon Bros), but he has made his mark as the next behemoth of the World Wrestling Entertainment universe by beating and smothering the current roster, even multiple ones at times! Still yet to hold a title, once this mammoth destroys the entire Raw roster, there will be nothing left but give him the Universal title on a platter. He survived getting crushed by a dump truck, for Christ’s sakes!!!