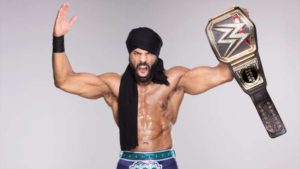 9. Jinder Mahal – What else can we say about the Canadian-born Yuvraj Singh Dhesi except that it could quite possibly be the greatest, unsuspecting turnaround career of all time in professional wrestling? A glorified “jobber” at best after he debuted for the WWE with a major push as the Great Khali’s brother-in-law, Mahal dropped low in the card to become “the funny one” in 3MB (3 Man Band) with Drew McIntyre and Heath Slater. He made a huge comeback in 2017, winning the WWE title from Randy Orton and holding it for the majority of the year. Some think it was a bit of a snuff to give him the title and hold it for so long, but that is why this underdog did some of the best work of 2017.