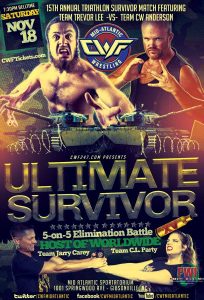 You can watch the entire event below:

Anyway, the match itself was pretty action packed. For as many guys were in the match, everyone had an opportunity to have a cool moment. Whether that moment be a cool showcase for themselves, or an awesome encounter (particularly those between Cain/Dirty Daddy and Cain/Adler). Everyone had a chance to leave an impression, even Stokely Hathaway. Although, I’ll admit, it was weird seeing Stokely Hathaway as a wrestler. Weird in a kind of cool way–What isn’t cool about seeing Stokely Hathaway hit a spear?–but weird none the less because I know him best as Stokely Hathaway, the manager. Ironically, the first CWF main event I ever saw was between Hathaway and White Mike, but that was a comedy match. It’s weird to see serious title contenders like Caprice Coleman sell for Stokely. Hathaway even got a chance to eliminate Caprice Coleman of all people (albeit via interference from Joshua Cutshall). But hey, still a really fun elimination match. Definitely seek out this match from the show specifically if for nothing else.

After Sharpe knocked DD into Adler (which is interesting considering DD and Adler just had a match last week), the match was down to Sharpe and Adler. They wrestled for a couple minutes until Sharpe avoided a 450 Splash, allowed Adler to run into his Uppercut, and got the upset victory as the sole survivor of The Dream Team. After last week’s embarrassing defeat to Trevor Lee, Sharpe needed this victory and after an excellent performance in the match, he looked like a million bucks. He got a clean win that everyone bought into. Hopefully, NOW Sharpe starts a hot streak from here.

In the midst of The Dream Team’s celebration in the ring, Aric Andrews came out. He congratulated Adler on a good performance, despite coming up short. He passed around #ChooseAndrews stickers to the crowd before asking, again, why he doesn’t have a TV Title match coming up. He also asked why we should care about Team CL Party vs Team All Stars later tonight when Jarry Carry is terrible and CL was better as his personal ring announcer. He holds a “talent hall meeting,” taking questions from everyone, including Stokely Hathaway. He asked why is the TV Champ and Andrews such losers. He slapped Andrews in the face, but Andrews still shakes Hathway’s hand. Right before nailing him with a THICK clothesline, then stuck him with his finisher. He then stamped a #ChooseAndrews sticker across Hathaway’s mouth. Not sure if this means Andrews is face now, but I like the character progression here. In a split second, Andrews has gone from suited up politician to an ill tempered fighter and back again. It works and I like it. Vote for Andrews. He’s great, and he’s gonna make CWF great again (even though it never stopped being great, but just roll with it).

Next, we get a quick squash match. Metallico, Number Boy, & Kool Jay vs. Mike Mars in a handicap elimination match. Unsurprisingly, Mike Mars disposes of each guy with ease and wins the match. Not much to write about here. Just a cool down match after that whopper of an opener. It’s a squash that also works as a way to put over Mike Mars and continue his dominance streak. Obviously CWF have big plans for the big man and he continues to look impressive.

Up next, we get an promo with Donnie Dollars, who we actually haven’t seen in awhile. He reminds us that at CWF Ultimate Survivor 2004, 13 years ago (God, I had no idea CWF was around that long). Dollars has watched guys come in and take his spot. He’s sick of it and makes an open challenge. Out comes another CWF original, Ray Kandrack.

We get Kandrack vs Dollars, They start fighting, but within a couple minutes, Kandrack nails Dollars with a Ray Gun for the win. This felt like another squash filler match, only less effective than the Mars one. The Mars match was meant to put over a new monster heel. This felt more like a nostalgia act than anything else, and when it was too short to provide the lasting effect of nostalgia, then frankly, what’s the point? It is what it is, I suppose. Nothing more to say. Nothing to see here.

Then, we get another pool side Story Time with Brad Attitude. This isn’t much different from the ones we’ve been getting the last couple weeks. Those promos weren’t noteworthy enough to mention in these reviews, but this one is different for two reasons. One, its worth noting that Attitude was sitting beside his bleach blonde best friend. At risk of getting fired, Attitude didn’t wanna show his friend, but he was Here to Show the World (C’mon! Bring it On!) his plans for CWF Battlecade. Most importantly, he challenged whoever is walking into the show as champion to a title match.

Next is the match that had the most hype surrounding it during the build-up to Ultimate Survivor: The All-Stars (Captain Jarry Caray with Arik Royal, Roy Wilkins, Mace Li, & Otto Schwanz) vs. Captain CL Party with Snooty Foxx, Faye Jackson, and the Sandwich Squad (Mecha Mercenary & Aaron Biggs) in a traditional 5-on-5 elimination match. The winner gets to be the permanent announcer of CWF. When I found out that there were going to be three multi man tag matches tonight, I was worried some matches would get stale because its too much of a good thing. I thought the night would get stale by the second match. Thankfully, that was not the case at all. It helps that this match had so much story and build going into it, so there was a lot to get invested in. There was also plenty of memorable spots. For extra heat, every time one of his boys hit a big finisher move on somebody, Jarry Caray would tag in, get the pin elimination, and tag back out. The All Stars beat down on Faye Jackson to massive heat. The random appearance from Andrew Everett’s grandpa doing a whistling run in on The All Stars. A lot of great stuff here all the way to the end.

The end saw CL Party and Sandwich Squad being the last members of Team Party and Jarry Caray being the last guy on his team. He tried to run off, but Snooty Fox and Faye Jackson returned to ensure Caray stayed in that ring. CL Party took on Caray by himself. Since she’s not a trained wrestler, she didn’t do too much (thank God). She nailed him with a forearm, and then a really surprisingly impressive Triangle Choke for the final elimination and the win. Might be my favorite elimination match of the night, but it’s close between this and the really fun opener. Satisfying end to a nice storyline.

PWI Heavyweight Champion C.W. Anderson’s team vs. CWF Heavyweight Champion Trevor Lee’s team in a best two out of three falls Triathlon Survivor match. By the way, Brad Attitude was on Anderson’s team, which was weird because in his promo via satellite from earlier, Attitude said he wasn’t in the area in order to attend a Guns n’ Roses concert in Las Vegas. But whatevs.

This match was booked at the very last minute on the go home show last week. As a result, I was the least invested in this match because there wasn’t much of a story to it, but boy, there were enough talented guys to make this watchable and even entertaining for what it was. Bunch of chaos. Bodies flying. Good stuff. The match ended when Brad Attitude hit a Pop-Up Powerbomb (assisted by Anderson) on Chet Sterling for the win. After the match, Trevor Lee, with blood pouring down his face (he got hit with brass knuckles during the match by Roy Wilkins), Lee cut a chilling promo about how he woke up today and found out his father was rushed to the hospital in Chapel Hill after falling down and suffering head trauma. “Like father, like son,” Lee said as his own blood dripped down to the mat. If Wilkins wants to keep attacking him with brass knuckles, then Lee has a proposition for Battlecade: Trevor Lee vs Roy Wilkins for the CWF Mid-Atlantic Heavyweight Championship in a First Blood match.

Man, Battlecade is going to be awesome. Can’t wait.

Until then, let’s just enjoy this awesome Ultimate Survivor show. It’s mostly highlighted by three tag matches, but they are all great matches that are worth seeing before 2018 rolls around.