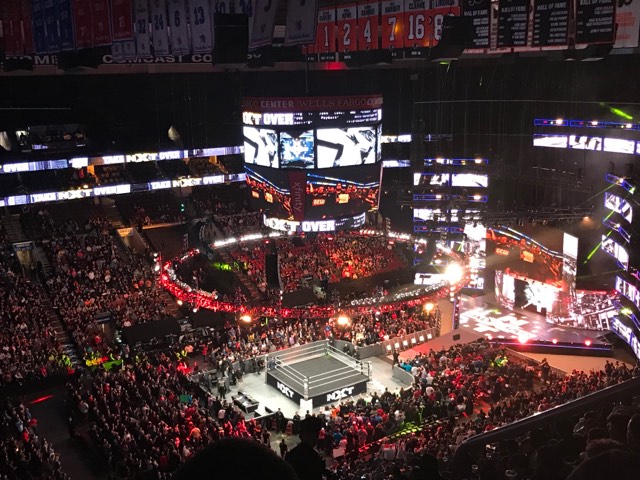 Kyle O’Reilly rolled up Akam after Akam inadvertently crashed into Rezar as they went for the Super-Collider.

— Recent NXT signees War Machine were shown in the audience.

The Velveteen Dream promised to knock Ohno out in 30 seconds, and almost did connecting with a huge right hand to start the match. Dream eventually connected with a cartwheel Death Valley Driver, followed by his Purple Rainmaker elbow drop off the ring post for the pinfall victory.

Ember Moon pinned Shayna Baszler while Baszler had her locked in an arm-bar submission to retain the NXT Women’s championship.

After the match, Baszler ran up from behind and choked Moon out on the ramp.

— Recent NXT signee Ricochet was shown in the audience.

Black had Cole beaten but Undisputed Era members Kyle O’Reilly and Bobby Fish broke up the pin. SAnitY came out, neutralizing O’Reilly and Fish, which allowed Black to connect with a Black Mass Kick, and scored the win.

— Former TNA IMPACT Wrestling World Champion EC 3 was shown in the audience, confirming the rumors he had re-signed with NXT and that he was in Philly for the weekend.

Zelina Vega interfered on Almas’ behalf but was intercepted on her second effort by new NXT signee (and also Gargano’s wife) Candice LeRae. Almas connects with a double-knee strike on the apron into the ringpost on Gargano before hitting a draping hammerlock DDT off the top turnbuckle to retain his championship.

— After the match, Tommaso Ciampa came out and attacked Gargano from behind with a crutch making his return from injury.

SPOILERS: Results For Matches Taped Prior To NXT TakeOver: Philadelphia For Next Week’s NXT TV

Bobby Lashley To Return To The WWE At Tonight’s Royal Rumble PPV?