Updated Look At The Finished Version Of The AEW TNT Championship

The AEW TNT Championship Tournament finals were held at this past weekend’s Double Or Nothing PPV. However, due to the COVID-19 pandemic the Title Belt was not finished in time for Saturday’s Double or Nothing event. AEW debuted an unfinished version of the belt instead.

The match saw Cody Rhodes victorious over Lance Archer to become the first-ever TNT Champion. The belt was presented to Cody by boxing legend Mike Tyson. Tyson will also appear on tonight’s episode of AEW Dynamite.

Fresh off his appearance at AEW’s Double or Nothing Pay Per View, Iron @MikeTyson will make his #AEWDynamite debut LIVE THIS WED, May 27th at 8/7c on TNT!

Re-Live all the action and excitement from #DoubleOrNothing now on demand from all major providers, @FiteTV & @brlive pic.twitter.com/p8WkpNfWG9

It was mentioned during the TNT Title Match at Double or Nothing that the belt was not finished, as did Cody Rhodes in the post-show media scrum. The belt maker for the AEW TNT Title, RED Leather issued a statement addressing the belt’s “in progress” design, which stated:

“Unfortunately due to Covid-19 the platers I used are working on skeleton crews and can only work on respirators / emergency equipment. Once regular business resumes this belt will get some much needed highlights in nickel and gold as well as a relief TNT logo.”

The finished version of the AEW TNT Championship is supposed to be revealed on tonight’s episode of Dynamite according to Cody Rhodes during the Double or Nothing post-show media scrum.

According to RED Leather, the following is “nearly exact to what the final belt will be.” 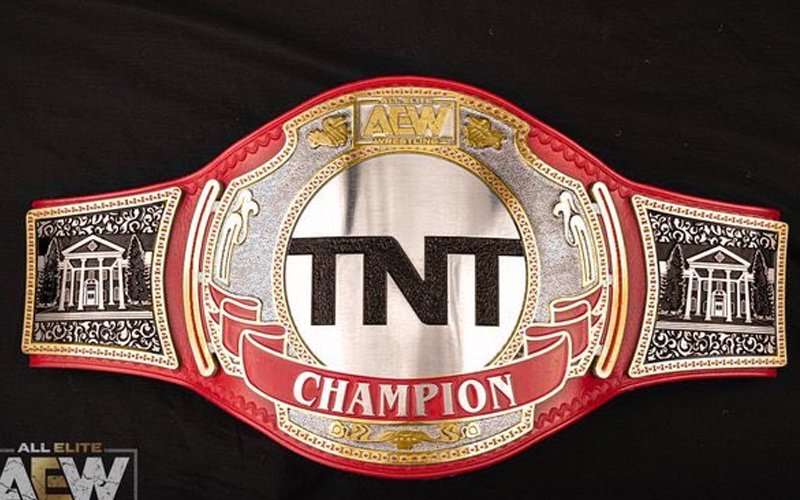 On tonight’s episode of AEW Dynamite there will be a Battle Royal to determine the #1 Contender for the AEW TNT Championship. The winner will face Cody Rhodes for the title on the June 3rd episode of Dynamite.

This Wednesday there will be a battle royal where the winner receives the first opportunity at the #TNTChampionship held by the #AmericanNightmare @CodyRhodes.

Which version of the AEW TNT Championship do you like better? The Unfinished or Finished version? #AEW #AEWDynamite #AEWonTNT #TNTChampionship pic.twitter.com/Db2is5mRGv

Join the discussion but commenting on the tweet above, or commenting in the comments section below.

NJPW Still Talking To AXS About Returning To Network, Other Networks In Play

Kazuchika Okada Reveals HBK Match Inspired Him As A Pro…

Justin Credible Says Paul Heyman Paid Out Of His Own Pocket…