Haskins and Havoc come out to the ring for their match. Jack Sexsmith comes out and takes the mic. He says that while he idolized his opponents before, they did teach him a lesson in betrayal. That lesson being that there is no such thing as a friend in wrestling. However, you can rely on family. “You can rely on your brothers, or should that be, BROS.” 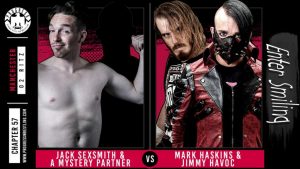 Jack Sexsmith has chosen former Atlas Champion Matt Riddle as his partner against Haskins and Havoc.

They brawl to start, with Havoc beating Sexsmith with his own Ugg boot. After a good start from the Sexy Bros, the heels get the advantage on Sexsmith. This is my first time seeing Haskins as a full-on baddie, and his style is really tailor-made for it. Riddle gets in, and him and Haskins have a really good exchange. That’s a singles match I wouldn’t mind seeing on a Chapter show. The Sexy Bros almost get the win with a double stomp Doomsday Device variation, but Sexsmith switches places on the cover so Havoc can pull him out of the ring. Riddle goes to dive on Havoc, but Vicky stops him so Mark can dive on him. While the ref moves Vicky away, Mark and Havoc get duct tape and tape Riddle to the ringpost.

That leaves Sexsmith alone in the ring with the former Progress champions. He puts up a fight, but the two men prove to be too much for Sexsmith to handle. A superkick into an Acid Rainmaker gets the win for the bad guys. A good establishing win for Haskins and Havoc, and a fun match to boot. 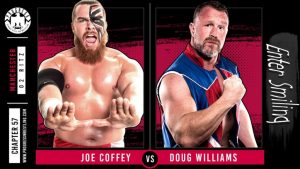 The now-former ICW World Champion Joe Coffey is an injury replacement for Wolfgang.

They start with a criss-cross spot, which everyone pops for because criss-cross spots are the best. Watching this match makes it clear to me that Doug Williams is the master of that grappling/hard-hitting style that guys like Tim Thatcher and Zack Sabre Jr. do as well. There’s just something about how Williams does it that appeals to me in a way the other guys don’t.

These two go back and forth, with both guys putting in hard shots. Williams hits the Chaos Theory, but it only gets 2. Williams hits the Revolution DDT, but misses the double stomp. Coffey goes for his rolling lariat, but Williams keeps blocking it. Williams sends Coffey into the ropes, but Coffey gets his lariat for the win. After the match, Williams says that after 25 years in wrestling, he doesn’t think he can do it anymore and leaves the ring. Despite his words, I hope this is the start of more for Williams in Progress. He never fails to be awesome. Coffey here was his usual self, and these two made for one fine contest on this night. 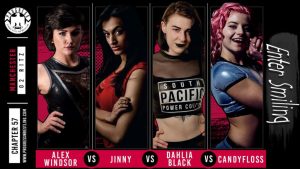 The winner of this match becomes the defacto #1 contender to Toni Storm’s Progress Women’s Title. Storm is on commentary for this one, but doesn’t say much of note. This is Candyfloss’s Chapter show debut.

The match starts with Jinny and Dahlia beating the hell out of each other. These two fight with a venom that is taking this feud to a new level. Jinny and Dahlia Black do a Bad News Brown/Roddy Piper tribute act and brawl to the back. In the ring, Candyfloss keeps locking on armbar variants onto Windsor. Eventually she locks one on in the middle of the ring, but Jinny and Dahlia fight their way back to the ring and break it up. It’s a lot of chaos, but Windsor ends up taking Black and Jinny out with a tower of doom powerbomb. Windsor hits a DDT variation on Candy to get the win.

I like the story that Black and Jinny are canceled each other out, effectively costing each other the title shot. As far as Windsor goes, I’ve seen her multiple times in Progress, and the best I can call her is inoffensive. This upcoming match with Toni Storm will be Windsor’s biggest match in Progress by far, and her biggest chance to impress as well. The match will probably be decent at worst, but Windsor really needs to have a standout performance to stay ahead of the new influx of women, like the impressive Candyfloss, that are coming in.
Winner: Alex Windsor 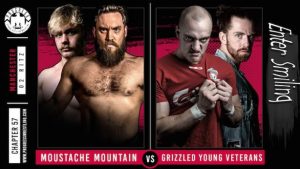 After a very entertaining promo battle between Seven and Gibson, the Vets attack Moustache Mountain before the bell. Seven and Bate send them packing, but Joseph Conners shows up and jumps Moustache Mountain from behind. He grabs the mic and says that he does what he wants wherever he wants to do it. Before long, the numbers are even as Pete Dunne comes out to a massive reaction. Jim Smallman makes this a six-man tag, and dives from Bate and Dunne kick us off!

There’s a giant brawl on the floor. The Vets powerbomb Bate onto the apron, and Connors drops Dunne on some chairs to take them out. That leaves Seven in the ring to get beat down 3-on-1. Dunne may be hurt badly, as there’s a medic with him and Glen Joseph gets off of commentary to check on him. Bate gets in and he’s a house of fire, but he’s still outnumbered and the heels cut him off too. Eventually, Dunne gets tired of his team getting beaten down and gets into the match. He immediately takes Connors to the floor and hits an X-Plex on the apron.

It breaks down into a six-man brawl again, with the Vets getting a lot of offense in. Drake even hits a 450 splash, but the cover gets broken up. Seven and Bate hit their big moves on Drake, but before Dunne can hit the Bitter End, Connors hits him with a chair for the DQ. After the match, Dunne asks Jim Smallman nicely to give him a match with Conners, to which Smallman obliges. This match was a lot of fun. Dunne being hurt was scary, but it looked like he was fine by the end of it and it didn’t affect the match much at all. With Connors being booked against Flash Morgan Webster for Chapter 58, it looks like Dunne will have his send off in Birmingham at Chapter 59. 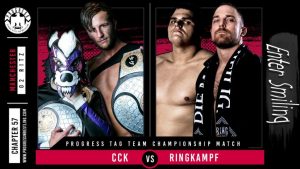 CCK won the titles at Chapter 55. This is their first defense of the titles. CCK asked for the biggest challenge they could get, so Progress gave them the team of Timothy Thatcher and Atlas Champion WALTER.

On commentary, Matt Richards says that WALTER would be the first person in Progress history to hold two titles at the same time if Ringkampf were to win tonight. WRONG, BREAD BOY! Pete Dunne was the Progress Champion and one-half of the tag team champions back at Chapter 39. He only lost the tag titles when he tried to award his half to Tyler Bate. To the match, Thatcher and WALTER beat the hell out of Lykos before focusing on Brookes. Brookes gives Thatcher a wet willy, and Thatcher’s face is amazing. Thatcher responds to the wet willy by stomping on Brookes’s injured arm. Lykos distracts the ref with his baking tray, and kicks Thatcher low. WALTER then presses Lykos to the floor, where Thatcher uppercuts him to take him out.

They focus their attack on Brookes for a few minutes before Lykos tags in. Little Lykos brings the fight to WALTER, and CCK hit dives onto both Thatcher and WALTER. It breaks down into a four-way brawl. WALTER boots a flying Lykos and hits a John Woo dropkick on Brookes. A powerbomb to Brookes only gets 2 when Lykos breaks it up. After some more action, Brookes takes out WALTER with a slingshot cutter. Lykos hits Thatcher with a BRAINBUSTAHHH!, and CCK follow it up with the Inkbomb for the win. This was a really fun tag match, and a great first defense for CCK. 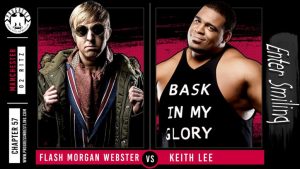 The crowd say that Keith Lee is just a town in West Yorkshire (referring to Keighly). The story of this match is what you would expect, which is that Keith Lee is too damn big. Lee just overpowers Flash on multiple occasions, stuffing armdrag and rana attempts. He even catches Flash on a dive and flings him into the crowd and an unsuspecting lady (who was ok). He beats down Flash for a long time, and the crowd just want Flash to fight back. Flash does come back with some forearms and knees, and hits a tornado DDT that Lee kicks out of at 1. He sends Lee to the floor and hits 3 dives on him, but Lee comes back with big forearms that knock Flash down.

Flash hits his big headbutt on Lee, but Lee just headbutts him back. Ground Zero attempt gets reversed by Flash into a reverse rana for 2. Flash goes for the Strangler, but Lee stuffs it and hits a series of strikes and a MASSIVE Spirit Bomb. Flash kicks out at two, and that brings the crowd to their feet. He slaps Lee and flips him off in a last act of defiance. Ground Zero from Lee gets the pin and the win. An excellent big man/little man match, as Flash continues his series of having the best matches on Progress cards. 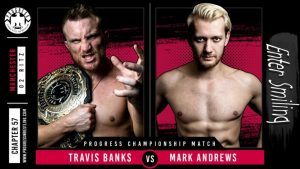 Travis Banks won the World Title at Chapter 55. This is his second defense of the title. Andrews won this title shot at Chapter 55 in a multi-man scramble.

This match was well-done technically, but as a main event, this was very underwhelming. The crowd wasn’t dead for this, but they were never in doubt that Banks would retain. It’s a weird comparison to make, but Mark Andrews is the Lex Luger of Progress. He just isn’t able to get the job done when it comes to the title. Maybe Progress should give Mark a bus. The Welsh Wagon, maybe?

Anyway, to the match. Andrews reverses the Slice of Heaven with a powerbomb. Banks later hits the Slice of Heaven, but Andrews reverses a Kiwi Krusher with the Stundog Millionaire. Banks and Andrews fight on the ropes before Andrews sends Banks down on his face. A second-rope 450 splash from Andrews only gets 2. Banks knocks Andrews off the top rope and hits the Kiwi Krusher, but Andrews kicks out. The Slice of Heaven gets cut off again, and Andrews hits a reverse rana off the second-rope. Andrews lands the Shooting Star Press, but Banks not only kicks out, he locks on the Lion’s Clutch and gets the tapout win. After the match, Eddie Dennis shows up and lays both men out with Next Stop Drivers. He stands over both men and holds the Progress Title high.

In a vacuum, this was a good match. But in reality, there was no universe in which Andrews was going to win this title, and that ended up hampering the match. Both men did work hard though, and the post-match did set up some important stuff for the future.