As we all know by now the landscape of wrestling is changing. AEW landed the biggest free agent in wrestling with their signing of Kenny Omega. WWE is doing what they can to hold onto the performers they see as the valuable assets. Talent are requesting their releases, WWE is rumored to be offering huge money to anyone that will sign immediate extensions. The Revival are your Raw tag team champions because they asked for their releases and were instead given a push.

These changes have headed behind the camera as well. WWE and their investors are making money hand over fist but their viewership for Raw hit all time low levels in December of 2018. Surprising moves are being made. Arn Anderson is out as producer/road agent while younger guys like Shane Helms and Chris Park, the former Abyss, are stepping into those roles as WWE tries to freshen the product and get fans, that the rating suggest they are losing, to come back.

In perhaps the most surprising move, WWE hired Bruce Prichard back to the creative team after over a decade away from the company. Prichard was a key part of the creative process for over 20 years. He had his hands in some of the best storylines in WWE history.

According to PWInsider, Bruce Prichard has been rehired by WWE to work in a top position on the creative team.

This news casts a lot of doubt of the future of his highly successful Something To Wrestle podcast. Would WWE let one of their employees work so closely with someone who is so deeply involved with AEW. Neither Prichard nor Conrad Thompson have addressed Prichard’s signing. Eric Bischoff, however, seems to be quite angry over the news. Bischoff tweeted “Here’s #SomethingToWrestle, f*ck @bruceprichard” with no additional follow up. 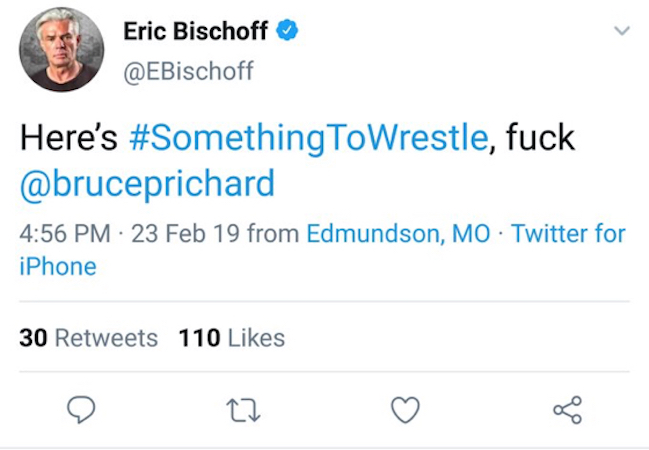 This raises questions as to if it’s a work for the upcoming live show they have with Conrad Thompson in Connecticut, Eric being angry with Prichard over going to WWE, or if STW is ending angry on behalf of Thompson.

Exclusive: FTR Says Dusty Rhodes Told Them To Never Leave Each Other’s Side

Exclusive – Vampiro Reveals He Didn’t Get Along…