It had been announced that a “major announcement” was set to be made tomorrow by the NY Giants & Metlife Stadium. Which was obviously the anticipated announcement that WrestleMania 35 would be returning to the NY Area next year.

While WWE says that the credit goes to the NYPost for breaking the story, bodyslam.net’s own Brad Shepard actually revealed the location to be Metlife Stadium last year. 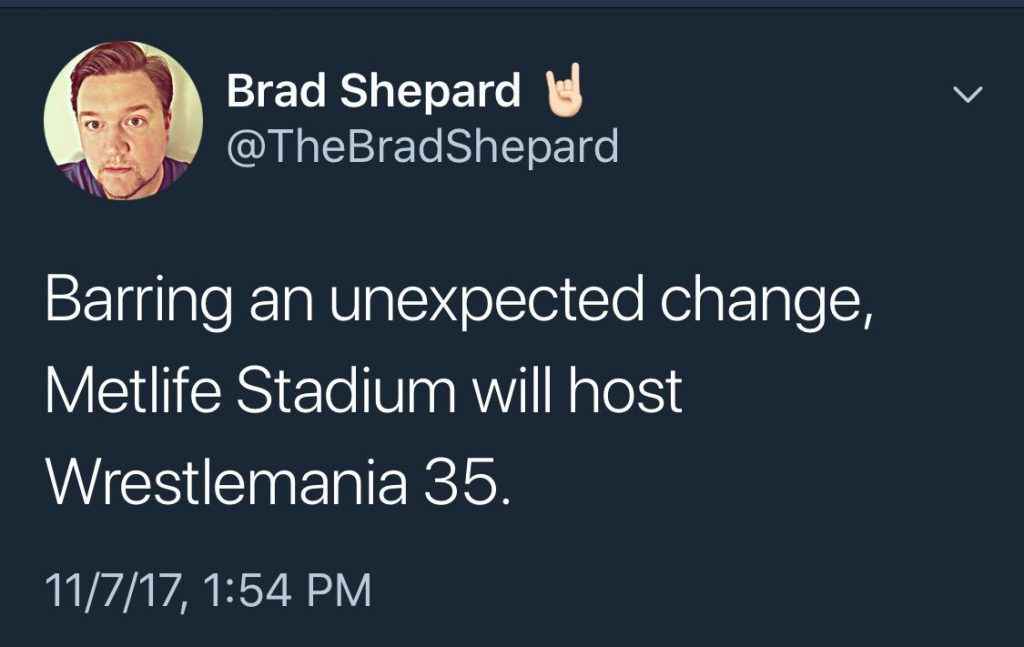 However, here is the official announcement via wwe.com:

“As first reported on nypost.com, the New York-New Jersey area will once again play host to The Showcase of the Immortals when WrestleMania 35 descends on MetLife Stadium on April 7, 2019.

The last time The Show of Shows came to MetLife was WrestleMania 29, an event held in April 2013 that grossed an excess of $72 million and attracted a sold-out crowd of 80,676 fans from all 50 states and 34 countries. The incredible event featured WWE Champion The Rock going head-to-head against John Cena, Triple H battling Brock Lesnar in a No Holds Barred Match, The Undertaker taking on CM Punk, and WWE Tag Team Champions Team Hell No clashing with Dolph Ziggler & Big E.

Another big part of WrestleMania Week will be the 2019 WWE Hall of Fame Induction Ceremony, NXT TakeOver, Monday Night Raw and SmackDown LIVE, all of which will take place at Brooklyn’s Barclays Center.

WrestleMania 35 has strong potential to be bigger than ever, with ticket and special Travel Packages becoming available later this year. Prepare yourself as The Grandest Stage of Them All returns to New York-New Jersey on April 2019.”

EXCLUSIVE: Shane Taylor Has Spoken With Keith Lee About…

Former NXT Superstar Believes WWE Will Sell In The Next Five…