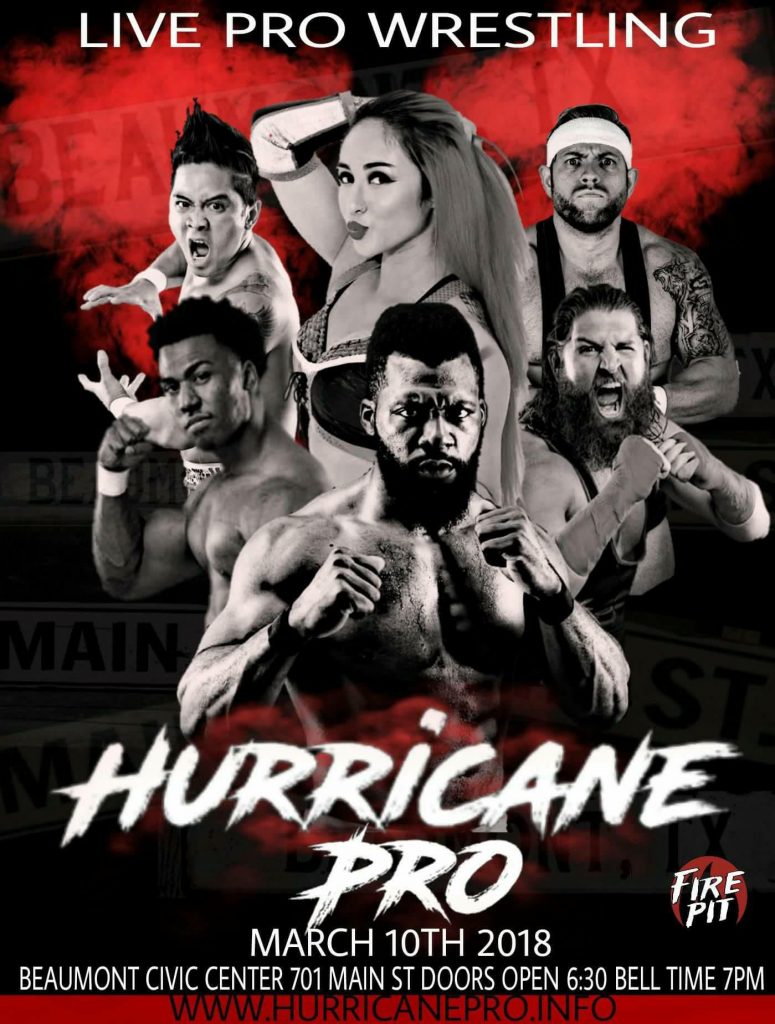 On Saturday March 11th, my local promotion out of Beaumont, Texas named Hurricane Pro Wrestling held a event consisting of a interpromotional rivalry with Wildkat Sports and Entertainment out of Louisiana taking on HPW to see who the best promotion is. The card intrigued me so I decided to venture out to the venue that it was being held at known as the Beaumont Civic Center for a night of family friendly action.

Now to add some context to this, up until over a year ago I was a regular at their shows and had gotten to know a lot of their wrestlers and announcers, they are like a big family where everyone knows each other. One of the best things I love about them as a promotion the wrestlers will come out before and after the shows and even during intermission sometimes to meet the fans and take pictures with them, very few promotions will let this happen unless you pay for a picture and it is quite frankly amazing.

Thoughts: A very good opening match featuring the debut of Matt Lancie who is a fantastic wrestler who impressed me with each progressive minute of the match. He dominated most of the match but Ashton Jacobs, who is known as Barbie to his adoring fans and critics impressed as well I have seen him a lot as part of Hurricane Pro. He is a veteran of the promotion and has been known for his bad guy antics. Lancie won via a spear that almost cut Jacobs in half.

Match #2: The Dark Alliance vs. Make Your Own Path

Thoughts: Showcase match in my opinion for The Dark Alliance who dominated at first from the go but Make Your Own Path also showed their worth in this match. These are two new teams to the promotion. Hopefully they will both be fixtures of this promotion going forward.

Thoughts: What a fantastic match that had a confusing ending. These two were evenly matched when at the end Wayne’s partner Flex gave him a chain which was used on Dao. Dao kicked out then hit his finisher on Wayne, but in the midst of that Wayne had stuffed the chain in Dao’s trunks which after Dao won the match, Wayne and Flex both made a ruckus about the fact that Dao had supposedly used the chain and to check his trunks. The ref did this and when he saw this overturned the match and gave it to Jared Wayne via DQ leading to him retaining the title.

Thoughts: What a powerful debut by Stone he made his presence felt when he dominated Jensen for a good portion of this match but Jensen proved himself resilient and came back and proved why he was the number one contender to the Hurricane Pro Championship. He won via the second rope stunner for the win. Jensen has been a long time presence in Hurricane Pro and looks to shoot to the top in the next few months. Stone I hope will become a regular in Hurricane Pro and bring his brand of wrestling over and over to this area.

After intermission the President/CEO of Hurricane Pro came out to let the crowd know that the June 16th show would feature a crowning of a new Women’s champion for the first time in Hurricane Pro’s history. Earlier in the night before the next women’s match he came out and let the crowd know that Miranda Elize who was supposed to face Kyra in a match up next injured herself at a Stardom event in Japan. So next we find out who her new opponent is.

Thoughts: Jenna is a newer competitor in the business facing a behemoth in Kyra who is a beast in the ring. She reminds me of Awesome Kong the way she moves around the ring. Jenna reminds me of Bayley a little with how peppy she is and moves in the ring. It was a very one sided match in favor of Kyra who won via Samoan Drop.

Thoughts: Wow! These two impressed me to no end. Terrale is a star in the making, he will make it to the big leagues one day, he has a charisma that you can’t teach and he had the loudest reaction of the whole evening. Spade has impressed me every time I have seen him in Hurricane Pro he is the current Wildkat Heavyweight champion. These two put on a clinic at this show. If this comes out online catch it, it is worth the watch. At the end Edgrin came out and attacked both men. Both Tempo and Spade walk out still the champions of their respective promotions.

Final Thoughts: This show was a coming out party for this promotion, the fans were packed in there, the wrestlers set the standard, now they have me hooked and I will be there every month.