Let’s face facts, people come in all shapes and sizes. Some individuals are born shorter than others because of their ethnicity or genes; such afflictions as dwarfism sometimes occur as an anomaly, but that is in extreme cases. On the other hand, the opposite could be said for those born taller than others for the same reasons, sometimes leading to occurrences of gigantism. Some individuals have no problems with their weight and can eat whatever they want without gaining an inch of fat because of a high metabolism. On the other side of the spectrum, however, genetics are also responsible for a good portion of overweight individuals that sometimes (not in every case, of course) lead to obesity. 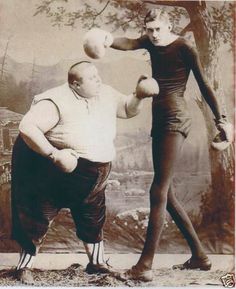 That being said, I am in no way fat shaming anybody in this article. I myself am somewhere between “skinny fat” and “dad bod”, so I have no platform to stand on for either side when it comes to the issue of being overweight. I neither condemn nor applaud such things as aesthetics, although I do sometimes worry about one’s health, but it’s not really any of my business. However, I do have an objective opinion about something that has been going on in the world since god knows when, so please remember – I am not body slamming anyone of any size for any reason in this article (see what I did there?). 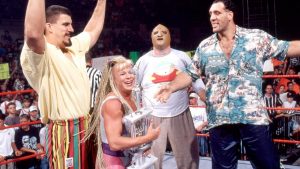 Of course, the world of professional wrestling is littered with an assortment of all these types of bodies, the most prominent over it’s tenure being a tall, muscular yet thin male. There are places all over the business for all sizes of individuals to have an assortment of characters, most of the time those of extreme stature that I mentioned for shock and awe. But most of the time whenever said tall, muscular individual in question would have to match up and defeat a certain opponent, the latter would have to be a somewhat imposing individual of substantial size that would make it difficult for the former to overcome. This usually meant it would be someone who could match the muscular wrestlers power with size and weight. 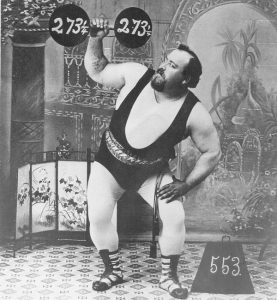 Let’s go back to the early nineteenth century in western Europe when professional wrestling was not even a thought yet. There were strength and strongman competitions at carnivals and vaudeville halls that were fixed. The supposed “strongman” would lift things such as weights, bells, and cannonballs that were light as a feather. It was a spectacle that would soon turn into professional wrestling later on, but to keep the illusion real, the performer would have to look the part and back in those days. They obviously did not know what they know now about health and fitness, so most of the “strongmen” tended to be muscular, yet overweight. As time would progress, the taller and more fit “strongmen” would become the bigger attraction. 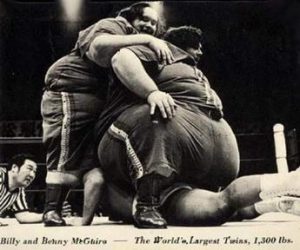 Fast forward to the nineteen fifties and sixties when professional wrestling was becoming a huge attraction away from the circus sideshows of Europe and more popular in North America. The sideshow attraction aura was still prevalent, as people of extremely large and small stature were pitted against each other in the ring. Wrestlers such as Man Mountain Mike, The McGuire Twins, Haystacks Calhoun, and Happy Humphrey were some of the most popular pro wrestlers of the time, the last reaching over eight hundred pounds. Despite how popular and over those wrestlers were, they would be ridiculed and stared at in public so much to the point that they were often refused service at restaurants because of their size. There was a national story where Humphreys himself was lodged in a telephone booth and it took eight police officers to extract him.

Later on in the nineteen seventies and eighties, wrestlers such as King Kong Bundy and Dusty Rhodes were becoming some of the biggest names in the territories at the time despite their appearance, but it was a performer hailing from Grenoble In The French Alps that really set worlds apart and become known as “the eighth wonder of the world”. Born André René Roussimoff, the phenom known as André the Giant would have one of the greatest careers of all time that spanned three decades and became a global icon. Aside from his seven foot four, five hundred twenty pound height and weight that made him stand out, he unfortunately suffered from his gigantism and ultimately succumbed to congestive heart failure. His career opened the doors to many others who struggled with weight. 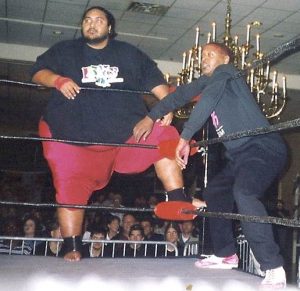 Names like Mabel (later Big Daddy V), The Natural Disasters, and Yokozuna began to make names for themselves in the early nineties. Mabel, at four hundred eighty seven pounds, would grow beyond his hip-hop-themed tag team “Men On A Mission” and become the eighth King Of The Ring in the World Wrestling Federation. Earthquake and Typhoon, better known as The Natural Disasters, won the coveted world tag team titles in nineteen ninety two, all the time weighing over eight hundred and forty pounds. Yokozuna, despite the Japanese gimmick as a real life Samoan, weighed almost six hundred pounds, yet was the fastest newcomer to the World Wrestling Federation to win the world heavyweight championship which he held twice and was inducted into the Hall Of Fame in two thousand twelve. Other Samoans would follow, but would not have the same success. 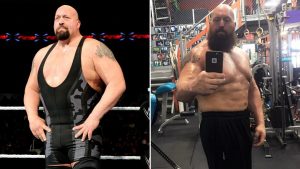 So… We are pretty much caught up to today’s product. The Big Show is an obvious successor to Andre The Giant for this day and age. Paul White has come a long way in his career and has now become a staple in professional wrestling for over twenty years. Of course, it’s often been a running joke as to how many times he’s switched from face to heel to face, but he’s always made most of the wrestlers he works with look fantastic. In the year two thousand sixteen and twenty years into the business, White took a few months off and lost a staggering seventy pounds before he returned to action. There is no substantial evidence to or for the contrary, but there are some whispers that pressure had come from the upper brass to trim down for his return to face the younger, stronger talent. 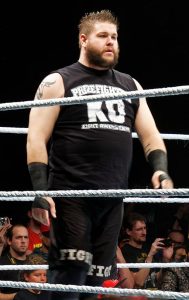 Kevin Owens is by far one of the best wrestlers in World Wrestling Entertainment, much less the world. Known by his real name, Kevin Steen, before his entrance into the company, the Canadian native wrestled independently across the world for over a decade honing his craft. He has always had a bit of a weight issue, but that has never stopped him from being an incredible worker in the ring, even outclassing wrestlers half his size with no problem whatsoever. But it has been said that Vince McMahon has never been impressed with the physique of Owens and has tried multiple times to get him to lose weight or hide it from the audience. Owens has seemed to do a fantastic job despite this, but if he will make it back to the top of the card is still unknown. 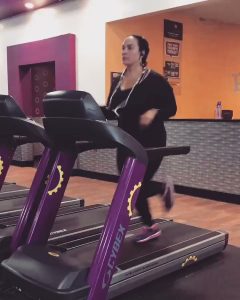 Recently, female wrestler Nia Jax has posted a picture on Twitter of her on a treadmill, claiming “I am subjected to body shaming & it’s something I have accepted. It sucks when you get it in your own backyard around people you’re changing in front of and trust with your body. I am a HEALTHY bigger woman, I LOVE MY BODY. Body shaming is WRONG!” which is a shame in itself. It is unclear who said it to her, but that does not matter. What’s wrong is wrong and I hope she got an apology, at least. There are friends of mine that think she is the most beautiful girl on the roster. Are they wrong? 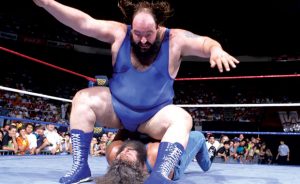 So is there fat shaming in professional wrestling? I think if you believe there is, you are right. If you believe there is not, however, I believe you should read back through this article again, perhaps multiple times. Of course, all body types have a place in the majestic art form of pro wrestling, much as in other sports, and in most cases the one that sticks out the most gets over without having to lift a finger! But is it okay to shame an entertainer, a co-worker, a friend, an enemy, or a relative because they happen to be overweight? Only you can honestly answer that question. But do not condone it.