WWE Stomping Grounds Pay-Per-View is five days and appears to be a stacked card apart from its horrible name…Who picked it out of a hat this time lol. Seven Championships will be defended, along with two highly-intense bouts. The main card will begin at 7 p.m. ET on the WWE Network this Sunday, with the kickoff pre-show will begin at 6 p.m. 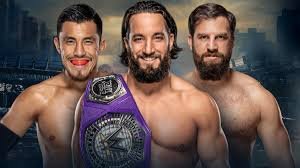 Last week there was fatal-four-way to determine the number-one contender for the cruiserweight championship; however both Tozawa and Gulak had their legs hooked in a pinfall, both competitors thought they won.
General Manager Drake Maverick and WWE officials were left confused, last night Maverick announced both competitors would face Tony Nese. My prediction is Tony Nese, I don’t think Gulak gets the title until SummerSlam. Tozawa will get his moment and I think it will be at WrestleMania 36! 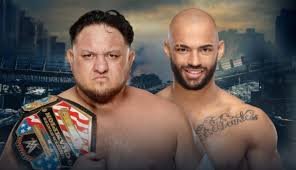 On Monday Night Raw there was a Huge fatal-five-way to determine Samoa Joe’s next challenger and The One and Only Ricochet secured the biggest win of his early WWE career. While I expect Ricochet to win the United States Championship; it’s not happening Sunday, Joe will make Ricochet go “Night Night” When locks in the Coquina Clutch. This will give Ricochet a reason to challenge for the title again at SummerSlam because he didn’t technically lose. And that’s when I think Ricochet wins the United States championship. 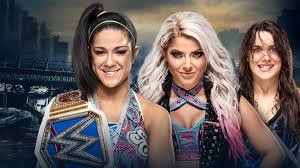 This one is difficult to predict; Bayley won the women’s championship at Money in the Bank when she cashed-in her briefcase on Charlotte Flair, Alexa Bliss recently made her return to the ring after a month of dealing with some health concerns.

She went to Smackdown Live under “Wild Card Rules” and defeated Charlotte and Carmella, I was shocked I didn’t expect her to win a match let alone become a number-one contender that quickly. Generally I would say 100% that Bayley is walking out still champion; however the last time I said this Bliss beat Bayley, humiliated her in her hometown and won the championship. 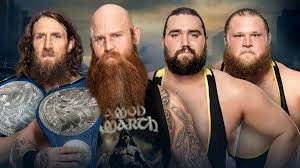 The Heavy Machinery was having a bit of a push in NXT before they were prematurely called-up to the main roster, and were used as a comedy act until found their new home on SmackDown Live. They’ve been quite impressive demolishing jobbers recently; The Planet’s Champions Daniel Bryan and Rowan are still early in their title run to lose the titles this early. If Bryan and Rowan lost them right now honestly don’t know what they would be doing.

Otis and Tucker don’t need to win gold right away; all they need to accomplish is silence all the doubts that WWE wrongly placed in our minds, that Heavy Machinery is nothing more than a comedy act. They will win the tag-team titles at some point in their career just not now. 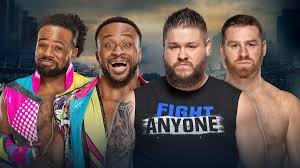 This is going to be a car-crash of a match; expect plenty of high-octane and heavy-hitting as all four men are going to beat the hell out of each other, to gain the victory. Big E suffered a legitimate injury right after WrestleMania, he made a return a month later and was attacked backstage. He claims “It was Owens” I have my own theory and if you care to find out please click the link below and read an article I had published…and much more. Xavier Woods was left to fight side-by-side with Kofi and has been beaten down too many times to count.

So Owens attacked E…let’s continue; and Sami Zayn the conniving little pest he is, makes you want to hate before he utters a word. He’s such a terrific heel; so back to the prediction…This is time for E and Woods to take retribution into their own hands, and topple the scheming heels. 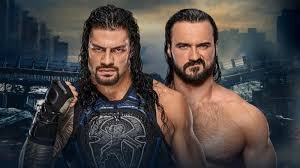 I was hoping they would give this contest a falls-count-anywhere or a street fight given the amount of chaos and destruction, they’ve caused leading up to the match. So sadly, they will keep most of the action inside the squared circle…That’s until Shane McMahon used his manipulative power to bend the rules. Shane beat Roman at Super Showdown last Friday; McIntyre needs a BIG win after losing to Roman at Mania, I see Roman evening the score at Extreme Rules next month.

We all know by now that this is a rematch from Super ShowDown so I believe this is a fine bridge gap until Kofi gets a SummerSlam opponent; I wish WWE would allow this feud to continue into SummerSlam, but the fact remains that Dolph Ziggler always picked as a dependable replacement. Which is a damn shame given his storied rivalry with Kofi Kingston that spans ten years. Fun fact, I just did a rivalry’s piece covering their rivalry all the way back to 2010 And if you watch all their matches you can see that they have incredible chemistry with one another. Their matches are always opening bouts but they deliver show-stealing performances every time!

Kofi is being put through the toughest test as WWE Champion; he has an uphill battle to climb as he not only needs to retain his title, but Kofi needs to put on the best matches of his career to prove the doubters wrong that he’s only an interim WWE champ. Especially since his path to the WWE title only occurred out of coincidence…The right time and Right place. Kofi and Ziggler will have an intense and nasty battle in the steel cage; I expect Ziggler to almost win at the end perhaps by climbing the cage, and Kofi drills him with Trouble in Paradise and then wins. 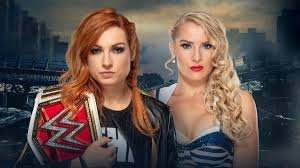 This rematch had built since Money in the Bank when Becky Lynch successfully defended her Raw Women’s Championship against Lacey Evans. She then got goaded into defending her SmackDown Women’s Championship against Charlotte Flair mere minutes after; The Man had things under control when The Sassy Southern Belle ran back to deliver A Woman’s Right, and Flair picked up the scraps and the end was academic. They’ve been at each other’s throats since, and Becky is tired of the games Evans has been playing for over a month now.

Evans is still getting established in her early run on Raw, while I can see her win the title very soon in the near future…WrestleMania perhaps? Now with that being said The Man did not have to scratch and claw and fight her way back into the winner takes all match at WrestleMania, just to lose both of her championships so quickly afterward. She needed to drop the SmackDown women’s championship so she could finally get away from Flair.

I feel so bad for Corbin Yes he’s the number one contender Yes he fought Seth at Super Showdown, and he gets his rematch this Sunday. However, he is an afterthought; ever since there was an announcement about a special guest referee it’s overshadowing this entire feud. Corbin is done as best to try to keep the focus on him but no matter how many times he tries he’s not the main focus…And then add in the looming Beast in the Bank that can cash-in at any time or any place, this does not bold well for The Lone Wolf.

All-the-while Seth FREAKIN Rollins is wreaking havoc swinging around steel chairs and no one is safe. He’s a madman on the loose seeking retribution for being toyed around by Brock Lesnar and his constant battle at squashing the bug known as Baron Corbin. Corbin’s not winning…The real questions are who’s the special guest referee and is The Beast cashing-in on Sunday?

Nikki Bella Reveals That She Has A Cyst On Her Brain

WWE Interested In Signing Another Member Of The Anoa’i Family

The WWE Royal Rumble and the SARMs

King’s Takeaways From AEW Dynamite Bash At The Beach

The WWE Royal Rumble and the SARMs