The Rise And Fall Of Asuka

The Rise and Fall of Asuka

Asuka was a force to be reckoned with, she was worldwide known because of her stiff strikes and powerful kicks that can be deadly to her opponents. Asuka made a major name for herself wrestling in Japan under the name Kana. She had an amazing career in her birth-place and I can only imagine the faith she must have had in WWE and The Vice President of Talent Relations and Creator of NXT Triple H.

On August 22, 2015 Urai attended NXT Takeover Brooklyn and rumors ran rapid that she could have signed with WWE. It was confirmed at a press conference in Tokyo, Japan on September 8, 2015. She signed with NXT the developmental brand of WWE and adopted the name Asuka. She Debuted on September 23, 2015 where she was confronted by a cocky and arrogant Dana Brooke and Emma.

On October 7, 2015 she had her debut match against Emma at NXT Takeover Respect. Asuka defeated Emma at the event and it would be the first of many victories in NXT. Emma and Asuka culminated their bitter rivalry in December at NXT Takeover London; where both women’s performance was highly praised by a famous wrestling critic Dave Meltzer who called the match “Fantastic”.

Asuka would then win a battle royal to determine the fan favorite Bayley’s opponent for NXT Takeover Dallas. On April 1, 2016 The Dangerous Asuka would defeat Bayley by locking in her “Asuka Lock” and choked Bayley out to Win The NXT Woman’s Championship. This win would start the most devastating undefeated Streak in quite some time! 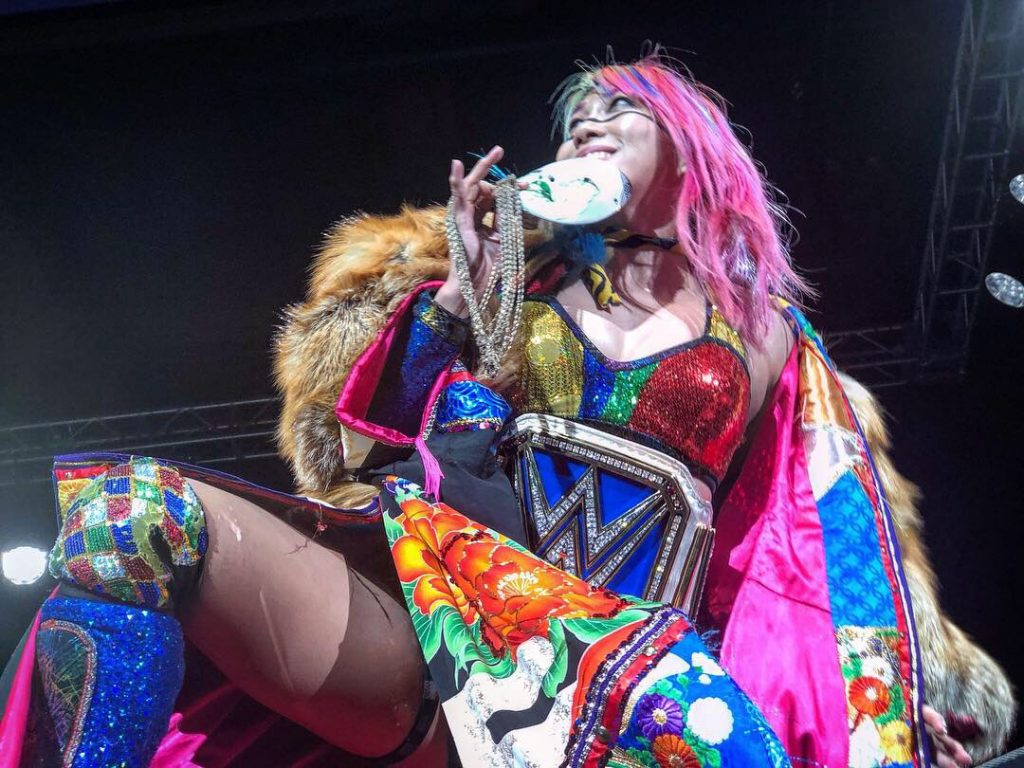 The Rise of Asuka

Asuka would run through all the competition in NXT, sometime even feeling so invincible that she defended the NXT Women’s Championship at NXT Takeover San Antonio against both of “The Iconics” and The unstable Nikki Cross! Asuka would dominate again and she would then hold an unprecedented record of 510 days as NXT Women’s Champion.

“Five days after breaking her collarbone during NXT Takeover: Brooklyn III, Asuka vacated her NXT women’s championship after a record-setting reign of more than 500 days”.

Asuka went from Undefeated to Underused in 2 years!

January 29, 2018 Asuka won the First Women’s Royal Rumble match to make history once again, she was then given the opportunity to choose the champion to face at WrestleMania 34. Asuka would wrestle on Monday Night Raw programming and all signs pointed towards her dethroning Raw’s Women’s Champion Alexa Bliss.

“Also, this week, Charlotte Flair took part in a Q+A at Wizard World Comic Con where a question about Asuka and her abrupt end of the historic reign came up. Charlotte said, “I want to wrestle her first, obviously I want to her to go to SmackDown LIVE where I am.” A dream match between the two women would be an iconic moment for sure and one fans would love to see LIVE or on their television screens”.

On March 11,2018 at WWE Fastlane after Charlotte defeated Ruby Riot and retained her SmackDown Women’s Championship Asuka came face to face and challenged her to The Grandest Stage of Them All WrestleMania 34. There you have it; the dream match was set. Charlotte had already accomplished so much in her WWE career. She was a 6-time Women’s Champion and she was putting that on the line against the longest undefeated streak in History! 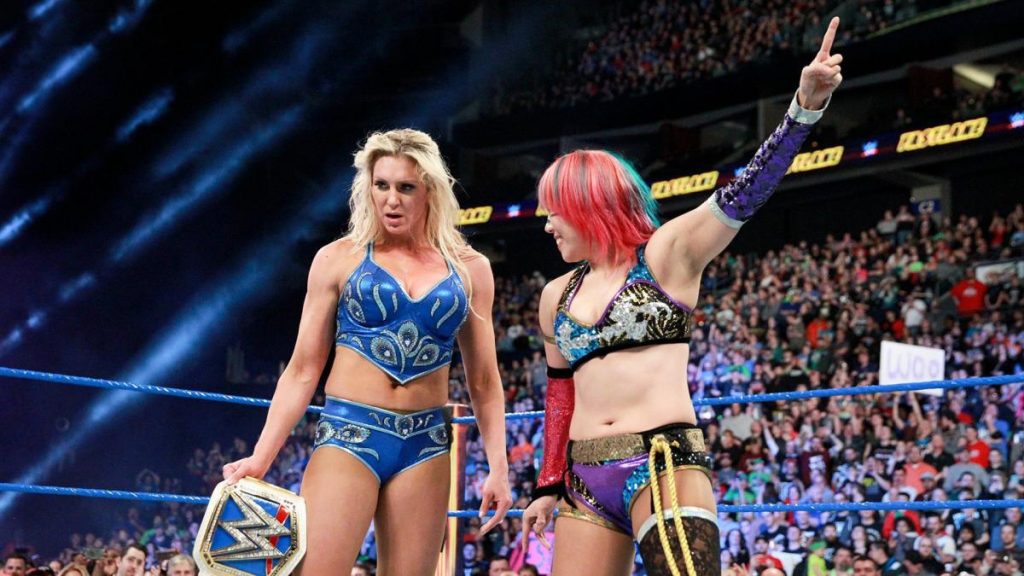 On April 8, 2018 at WrestleMania 34 the unthinkable happened, Asuka was defeated by Charlotte Flair by figure 8 submission! The undefeated streak was broken. There must be something about New Orleans because this is the exact same location 4 years ago The Undertaker’s undefeated streak at WrestleMania was broken by Brock Lesnar. Asuka immediately grabbed a microphone and said, “Charlotte was ready for Asuka”. It was a show of respect between competitors but, it was also bittersweet to see her record broken. 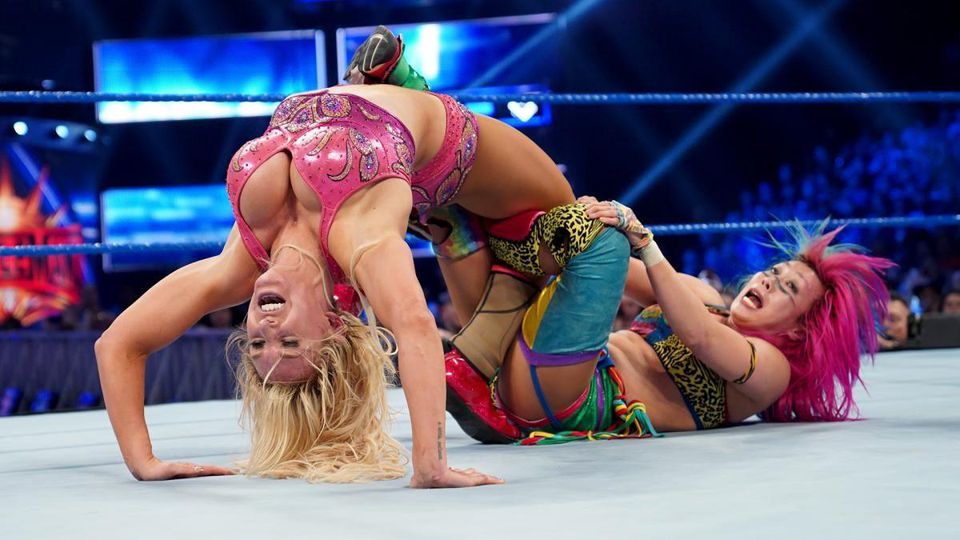 The Beginning of The Fall for Asuka

The SmackDown after WrestleMania Carmella the Money in The Bank holder would cash in on Charlotte and win her first Women’s Championship. Carmella was a trash-talking, moon-walking Princess of Staten Island. She would always gloat about her victories, even though most of her help would come from the aid of “The Pest” James Ellsworth.

At WWE Money in The Bank Carmella was defending her newly won championship after weeks of bragging about beating Charlotte. Her opponent was none other than Asuka, everyone including myself believed that Carmella had no shot in hell at winning and her title reign would end as a “One Hit Wonder”. Boy was I wrong, Asuka was in the midst of victory when the returning James Ellsworth in Asuka’s robe and mask. Asuka distracted by him was blindsided and Carmella was able to pin her.

The next month at WWE Extreme Rules “Asuka was waiting to continue her attack on James Ellsworth, who was hanging from the shark cage suspended above the ring. Carmella capitalized on a distracted Asuka by pushing her into the shark cage, knocking the former NXT women’s champion out long enough for the three-count”. 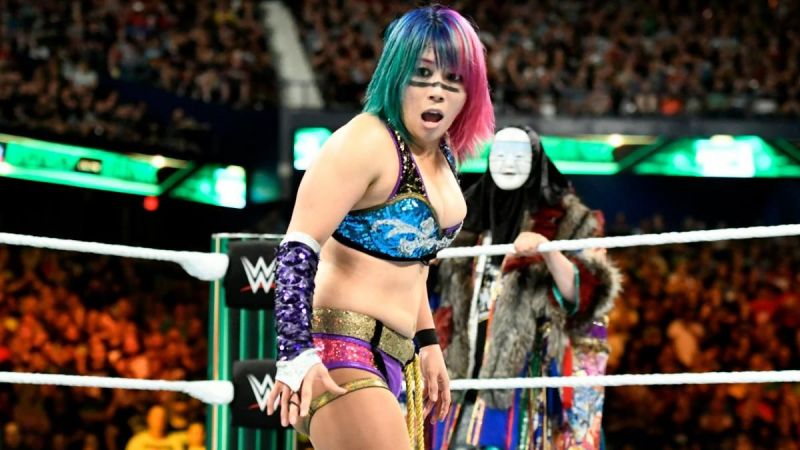 Summer of The Man Becky Lynch

On July 24, 2018 Becky Lynch won a one on one match against Carmella to become the # 1 contender to the SmackDown Women’s Championship after months of battling for her spot at the championship. On July 31, 2018 Charlotte made her return back to SmackDown to save Becky from an attack by Carmella. She was then given the same opportunity in a one on one match, if she wins, she gets added to the SummerSlam match. Charlotte defeated Carmella and it was announced it will be a triple threat now between her, Becky and Carmella.

“Charlotte Flair beat both Carmella and Becky Lynch in a Triple Threat match at SummerSlam on Sunday night to win the SmackDown Women’s Championship for the second time. Lynch had Carmella locked in the Dis-arm-her and was likely moments away from victory. However, Charlotte didn’t let her friendship with Lynch stop her from becoming a champion. She hit The Irish Lass Kicker with Natural Selection for the win”.

Becky was furious in getting taken advantage of by her “so called best friend”, another opportunity got ripped away from her. This time she slapped the Holy Hell out of Charlotte and began beating the crap out of Charlotte to chants of “Thank You Becky” 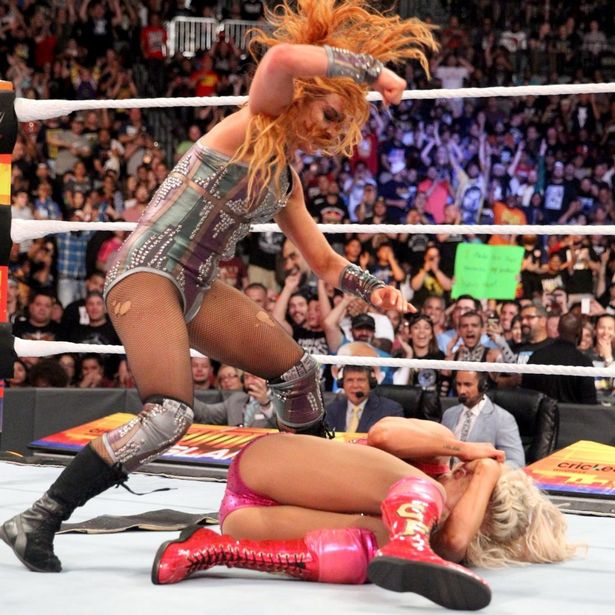 Fast forward to the week before Survivor Series and Becky got injured and had her face busted by Nia Jax during an invasion on Raw. “According to a report from Fightful.com, the reason why Asuka was added to the match was because of a segment prior to Survivor Series. When Becky Lynch was forced to pick a replacement for her match against Ronda Rousey, there were several SmackDown women lined up before Becky eventually chose Charlotte. However, Asuka received the largest ovation from the crowd, not Charlotte.

This apparently took Vince McMahon by surprise, as he thought Charlotte would be the clear front-runner for largest crowd reaction. As a result of this positive reaction for Asuka, he decided to capitalize on it by including her in the title match at TLC”.

Asuka won the Smackdown Women’s Championship when Becky and Charlotte were both shoved off a ladder in The First Women’s Tables, Ladders and Chairs match in History! Asuka was able to make the most of her opportunity and won the championship! 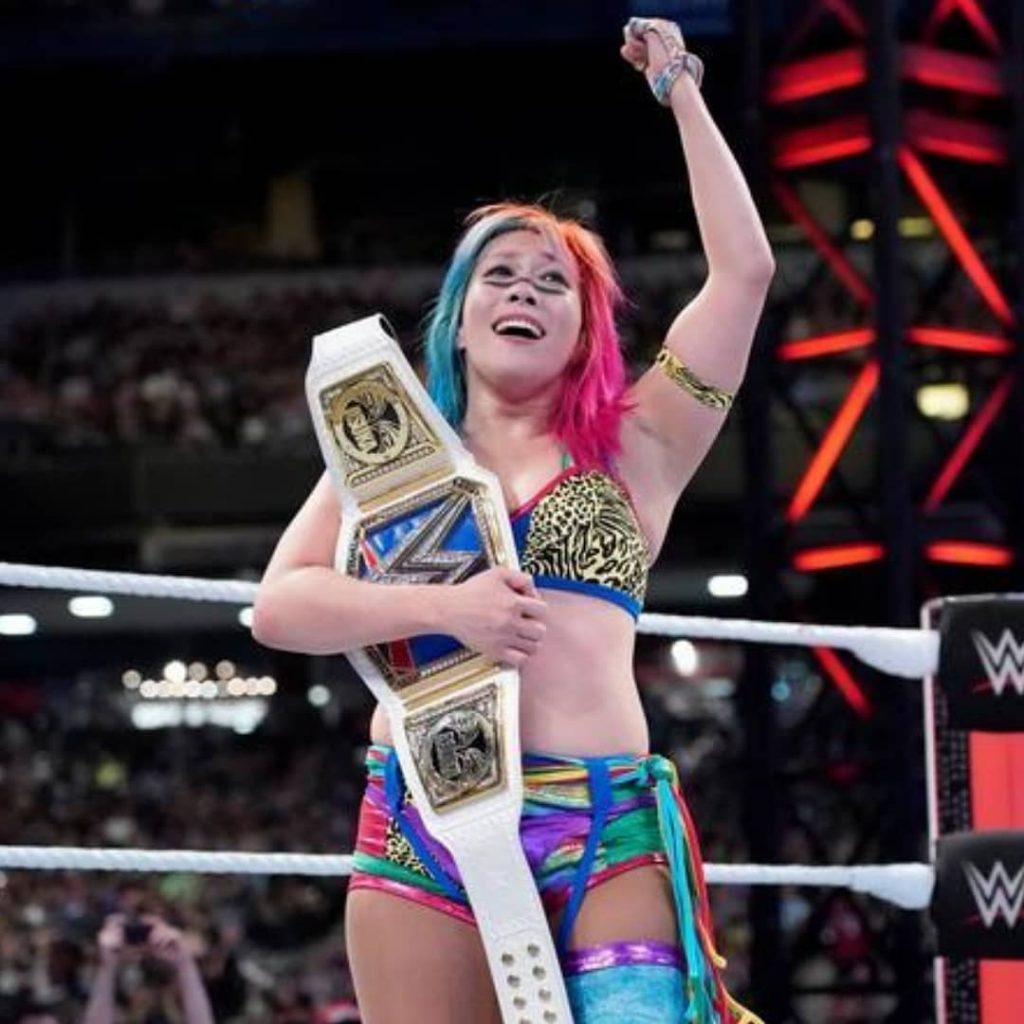 Maybe there is hope for Asuka After All?

Just 48 hours after winning the SmackDown Women’s Championship, Asuka already has a successful championship defense under her belt. In a match made by Vince McMahon himself, Asuka defeated her usual tag team partner, Naomi. It was a highly competitive bout but Asuka got the victory by way of submission.

How much does the WWE brass really believe in Asuka?

“You might assume they’re all in considering she was allowed to make the smoldering Becky Lynch submit at the Royal Rumble and retain her Smackdown women’s championship in the process. However, there is a reason to believe this was a rather empty win, and that she isn’t viewed as a particularly valuable piece of the roster, at least not at the current moment.

Instead, the Smackdown women’s champion worked a dark match against Charlotte. Well, at least she won”.

Now we are on the Road to WrestleMania and Asuka is again without an opponent. Rumors have been circulating that there is an opponent for her or she will defend against several superstars.

“On Tuesday’s edition of SmackDown Live, the advertised match card was supposed to include a fatal four-way matchup between Mandy Rose, Sonya Deville, Naomi and Carmella to determine the WrestleMania opponent of SmackDown Women’s Champion, Asuka”.

“Instead, Charlotte Flair, incensed by the comments by her WrestleMania opponent Becky Lynch, who accused Flair of being a third wheel in the Raw Women’s Championship match against Ronda Rousey and again railed against Flair’s sense of entitlement, hit the ring to challenge Asuka herself. There would be no No. 1 contenders match for the four SmackDown women, and ultimately, there would be no title defense for Asuka at WrestleMania, either. After 17 very, very good minutes of in-ring action, Flair locked in the Figure 8 submission and tapped Asuka out. Flair is now the SmackDown Women’s Champion”.

Apparently Vince McMahon made the call to take the championship off Asuka and bring it into the biggest match at WrestleMania 35 where Becky vs Charlotte vs Ronda Rousey winner takes all Gold! Asuka didn’t have a credible opponent and instead of adding another match to an already 17 match card for WrestleMania, they just took it off her.

It’s sad to see what Asuka has become, from being the most dangerous threat in NXT and having an impressive record of 510 days as NXT Champion to being made a complete afterthought on the Main Roster. Even after capturing the SmackDown Women’s Championship and defeating “The Man” at Royal Rumble you would think WWE would have faith in The Empress of Tomorrow. Unfortunately I don’t even know at this point what they can do to make her relevant again.

Sunny Finally Out Of Prison

Sunny Finally Out Of Prison