This year was Kofi’s time, his moment to shine. Everyone under the sun knew it, The New Day knew it, several tag teams knew it, but upper management didn’t take notice. That was until an unfortunate injury to Mustafa Ali happened right before the Elimination Chamber pay per view. WWE Upper management needed a replacement for match and Kofi Kingston was handpicked from his teammates to claim his rightful spot at the top! Sounds very familiar to how “The New Daniel Bryan” got his chance to shine at WrestleMania 5 years ago!
​
Daniel Bryan has always been a fantastic technical wrestler, an independent darling who has been called a “Submission Specialist” for such a long time. In the past two years he had been involved in several exhilarating feuds. Bryan was on fire and the WWE Universe was fully behind him, however he was never viewed as top champion material.

​During the Royal Rumble pay per view the crowd erupted in support of Bryan even in the wake of defeat. The WWE Universe couldn’t fathom how the management could continue pushing other stars instead of the beloved Bryan to the top of the WWE.

The situation got severely worse because during the annual Royal Rumble match everyone was waiting in anticipation for Bryan to come out and get his shot to win the whole match and find his road to WrestleMania for the WWE World Heavyweight Championship.

However, it never happened and instead as the numbers creeped closer to #30 the WWE universe in unison were desperately hoping for Bryan’s music to hit, but it never did. When the final entrant was the normally beloved Rey Mysterio Jr the WWE universe booed so loud that it was deafening and sad to see the disappointment on their faces knowing that they were ignored yet again.

The next night before Monday Night Raw started there was a meeting that took place where a superstar named CM Punk that decided to walk out because he was fed up with the way WWE treats their superstars and did not want to continue in his role.

Punk was involved with a feud with the Authority (COO Triple H, Randy Orton, Corporate Kane, Big Show, J&J Security) one that Daniel Bryan was involved with very recently. WWE was left with a dilemma because with Punk walking out left HHH without an opponent for WrestleMania.

On March 10th, 2014 Bryan was fed up, after being excluded from the WWE World Heavyweight Championship scene for months. After a public apology from Stephanie McMahon for being disrespected for several months and degraded as a B+ Player. Bryan decided it was time to take his future in his own hands and tonight he was getting what he deserves. Occupy Raw was upon us and the “Yes Movement” surrounded the ring, and they weren’t leaving until they got what they wanted! 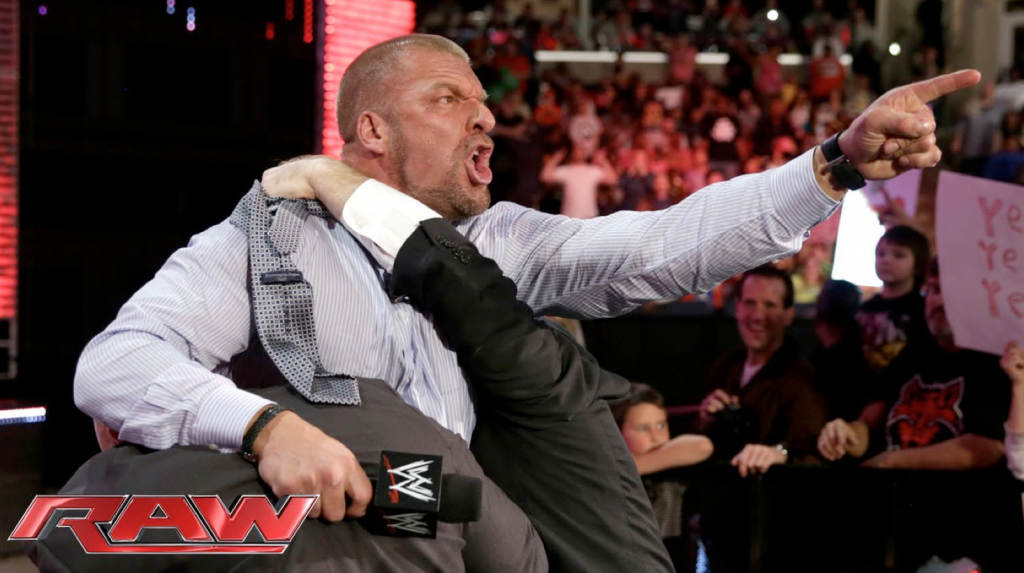 At WrestleMania 30 Bryan defeated HHH and won his way into the main event and Captured the World Heavyweight Championship against Randy Orton and the returning Batista!!!

Fast Forward to 2019 and the landscape has drastically changed, we have a villain and a hero in a brand-new story on the road to another WrestleMania. This time around though Daniel Bryan is the egocentric and self-proclaimed Planets Champion and the hero is the 11-year veteran Kofi Kingston.

Kofi has always been at championship level and has put on wrestling clinics for years. He’s a 5-time tag team champion alongside his New Day brothers (Big E Langston and Xavier Woods), they single handily Became the Longest Reigning Tag Team Champions with a record of 483 days?

A week before the Elimination Chamber pay per view where Daniel Bryan would defend his championship against 5 other men, one of the competitors Mustafa Ali, a newcomer to the Smackdown live roster got injured.

Mustafa Ali was the heart and soul of 205 Live for a long time now, and he was on a hot streak on SmackDown before the injury occurred. WWE once again in a compromising situation they had to make a hard choice and enter Kofi as the replacement, sound familiar?

Kofi was placed in a gauntlet match against all the competitors that night on Smackdown, and he lasted over an hour! It was amazing and as a fan of Kofi for a long time now I was so happy watching his performance.

Fast Forward to the Elimination Chamber pay per view and the last two competitors are Kofi and the Planets champion Bryan. With the WWE universe fully behind Kofi, He was putting on the match of his entire career to date. We truly thought Kofi would win the big one this time but unfortunately no it didn’t come to fruition on this night. The evil and dastardly heel won the match and retained his WWE Championship.

Two weeks later Kofi is announced as Daniel Bryan’s next Challenger at WWE Fastlane, and we were all set for a monumental contract signing, However, the Chairman of WWE Vince McMahon came out and thanked Kofi for all his efforts before smugly taking him out of the championship match.

You could hear the boos, and everyone was irate and did not agree with this decision at all. We were all wondering what Kofi must do to get what he most rightfully deserves and now we get the answer.

Like Bryan’s journey to the top Kofi had to overcome so many obstacles and now has an unwinnable situation to make it through next week against Samoa Joe, Randy Orton, The Bar, and the henchman for Bryan Eric Rowan.

Vince McMahon used a familiar term to describe Kofi about his level as a B+ player, whether this is the last obstacle in Kofi road to WrestleMania, it’s eerie familiar to 5 years ago where Daniel Bryan proved everyone wrong and made history.

Kofi may have stolen the blueprints from Bryan to achieve his dreams!

We sit two weeks away from WrestleMania and Kofi still did not have his championship match. That was until Vince McMahon allowed Kofi’s tag team partners of The New Day were given the last chance for Kofi to get to WrestleMania. With everything on their shoulders would Big E and Xavier Woods pull through for their friend or would they fail?
Kofi had a similar situation that happened one week ago, he overcame every single one of these challenges but when we all thought Kofi won his way to WrestleMania Vince McMahon pulled the rug out from under him.

This week we felt it was going to end the same way, however, this time it was different and Big E and Xavier ran through the competition and prevailed!

KofiMania is Upon us now, as me and the WWE Universe sit in anticipation for his WrestleMania Championship match.

Kofi powered out of a long and draining LeBell Lock attempt from Bryan to work the crowd into a fever. He overcame all of Bryan’s dangerous strikes and decided enough is enough, Kofi seized Bryan’s arms and ruthlessly kicking him to the face.

Kofi lined up and nailed his Trouble in Paradise finisher and put on a stamp on this incredible journey to the WWE Championship!

Fireworks shot off and entire stadium erupted in enthusiasm! This was the most unforgettable celebration in recent history as Kofi’s two sons joined him, along with Xavier Woods and Big E, in the center of the ring. Kofi-Mania in Full Effect!!!!! 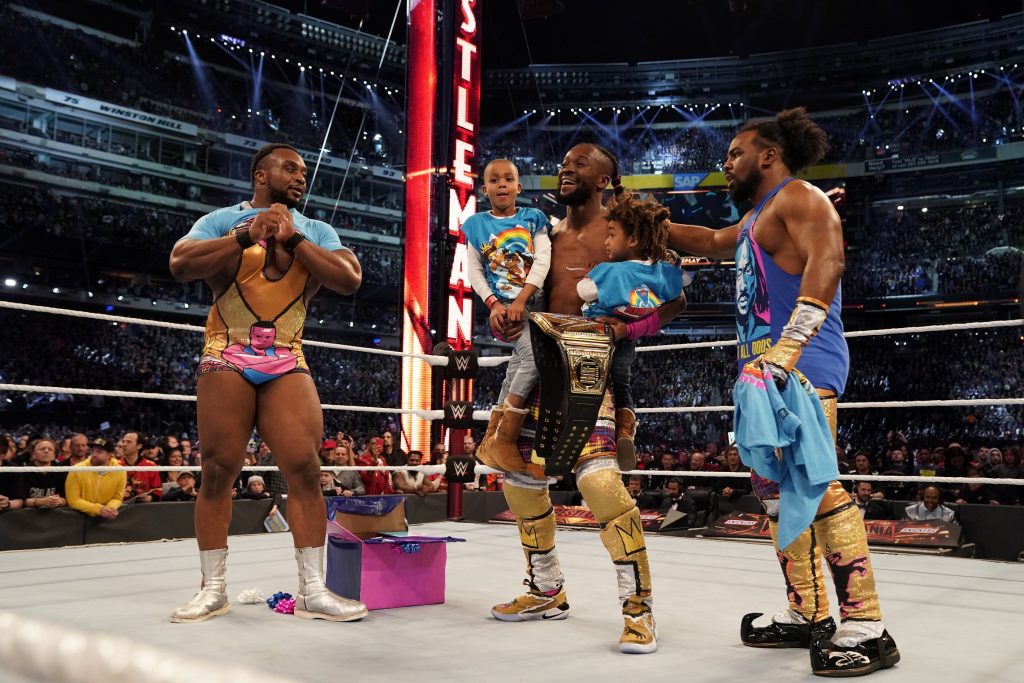 Which World Title Should Kenny Omega Go After Next?

NJPW Has Lost Their Mojo

The Incredible Journey of Tay Conti

Will Ospreay States Putting The Initials IWGP On A British…

Which World Title Should Kenny Omega Go After Next?

NJPW Has Lost Their Mojo