Enzo Amore tried to get as much attention as he could for his Whiskey A Go Go in West Hollywood by making a ruckus at Survivor Series. But it seems his efforts were in vain.

In order to get more fans after RAW from the Staples Center, Real1 scheduled his show to start at 11:30 PM. Except, RAW is out at 8 PM exactly, giving WWE fans ample time to decide what to do.

We were sent updates from someone who went to the event and noted how there were only 35 people in attendance for his concert. One fan even did a headcount and drew the conclusion that 35 was all the people he saw there. 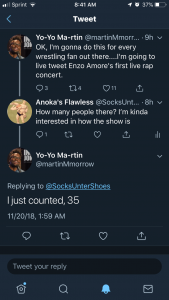 I’m going to @TheWhiskyAGoGo tonight for #EnzoAmore’s live show. Is it music? Is it comedy? I genuinely have no idea what this is going to be so I’ll be live tweeting the whole thing starting around 9:30 PM PST. #WWE #RAW #RealestGuyInTheRoom pic.twitter.com/0J98S4Sb0S

So it looks like Real1’s music career isn’t particularly going well right now. Perhaps he will have to get back to the drawing board and take the time to understand what he needs to do.

REPORT: Braun Strowman Will Need To Have Surgery After Brutal Attack On RAW

REPORT: Charlotte Flair vs Ronda Rousey Could Be Happening At The Royal Rumble