The Crown Jewel event has been surrounded by controversy following the murder of journalist Jamal Khashoggi. Which has led to many pulling out of Saudi Arabia and no longer doing business with them, and they urged WWE to do the same. Except the event will go on as planned, taking place on November 3rd.

While most of the wrestlers are against the event, Tommy Dreamer approves of the event and has an interesting reason why. His reasoning was WWE as a product unites people together. He wrote a passionate post on Facebook and this is what he said:

“In 1995 WCW went to North Korea
over 150,000 fans attended
All the political turmoil was put aside
People were united for a moment in time through professional wrestling
I was part of the 1st LIVE gathering after 9/11
I was confused, scared, angry
It was Vince McMahon who told everyone it was our choice if we wanted to perform and he said It’s our jobs(the wrestlers) to help put smiles on people faces and help people heal.
I cried when Lillian Garcia sang The National Anthem. I felt patriotism for the first time.
The most horrific event on US soil that changed all of our lives and it was wrestling for me (then baseball Mike Piazza HR) that helped me heal. We will never forget but we did smile & begin to heal as a community. A wrestling community.
I know the world was different in 1995 and before 9/11/2001 social media wasn’t as strong as it is. Peoples agendas weren’t pushed,
Just giving my opinion of wrestling and the entire WWE Saudi Arabia show
From my personal perspective
We never stopped something in our country when something horrible happened.
All the wrestlers that I know that went said they had a great time and the kids made it worth it.
Putting smiles on peoples faces is our job
Thank you, Vince” 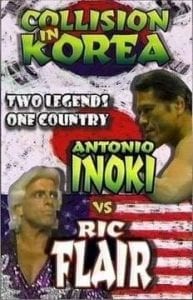 Update On Possible WrestleMania 35 Opponent For The Rock