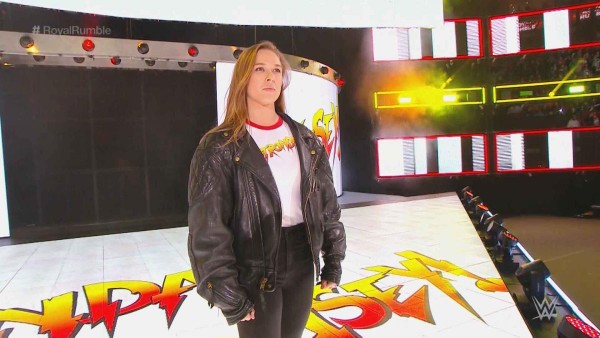 As seen on last night’s 2018 WWE Royal Rumble PPV, former UFC Champion Ronda Rousey arrived with the company making her debut at the conclusion of the broadcast following Asuka’s win for the Women’s Royal Rumble Match.

An interesting bit of information regarding her debut is that the jacket she wore last night was actually the jacket of WWE Legend and Hall of Famer “Rowdy” Roddy Piper. The jacket was given to Rousey by the family of Piper following his passing several years ago.

It is no secret Rousey’s fandom of Piper, even using the nickname “Rowdy” Ronda as her moniker during her MMA career, citing the WWE Hall of Famer as one of her inspirations. WWE will be using the “Rowdy” Ronda moniker going forward as well, which was seen with her wearing the “Rowdy” Ronda shirt to the ring last night made to look like the classic shirt that Piper wore during his career.

You can see WWE pushing Ronda Rousey’s new “Rowdy” Ronda shirt already, with fans in attendance at the Wells Fargo Arena in Philadelphia for tonight’s episode of RAW being the first ones with a chance to buy the shirt.

Be the first to get your hands on the official @WWE Ronda Rousey tee during @WWERawTour tonight #WWEPhilly pic.twitter.com/mzSo7P8gZQ