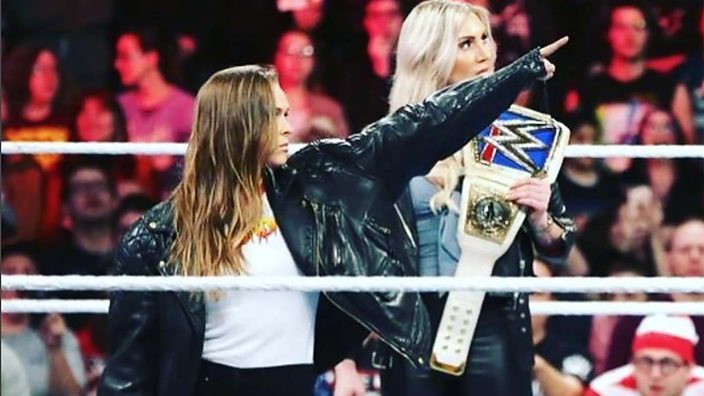 As seen at last night’s 2018 WWE Royal Rumble PPV, former UFC Champion Ronda Rousey made her highly anticipated debut with the company. Rousey made her official arrival when she came out at the end of the show following Asuka’s win of the first-ever Women’s Royal Rumble Match.

WWE attempted their best to keep Rousey’s debut last night secret, despite many reports speculating her participation in the first-ever women’s Royal Rumble match. PWInsider is reporting that very few people knew about Ronda’s arrival last night and that she was not listed on any of the production sheets or notes for the show. Rousey’s presence was also kept completely secret from everyone at the Wells Fargo Arena backstage, as she was not seen all night until about 10 seconds before she came out.

The word going around is that if you were not a McMahon or Kevin Dunn, you had no idea that Ronda Rousey was going to come out.

In regards to Rousey competing in the first-ever Women’s Royal Rumble Match, apparently it was never WWE’s plan to book her to be physically involved in the match. Instead the plan is to save that for WrestleMania 34, and reports came out earlier today that the plan is to have her be involved in a tag team match with another WWE Superstar to take on Stephanie McMahon and Triple H.

While ideally WWE would love to have The Rock be Rousey’s partner for the match, it is not known if the company would be able to secure him for the event, which could lead to WWE going another direction, possible Braun Strowman as her partner. It should be noted that WWE did a spot between Braun Strowman and Triple H at the 2017 Survivor Series that they have yet to follow up on leaving that possibility open as an option for the match.

WWE Announces Next Members Of The 2018 Hall Of Fame Class

Kairi Sane Discussed as a possible Entrant For Royal Rumble

Kairi Sane Discussed as a possible Entrant For Royal Rumble

Booker T Believes WWE Not Releasing Mustafa Ali Might Be a…