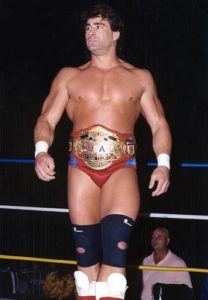 The Star Tribune is reporting the death of former AWA, WWF, and WCW Star Tom Zenk also known as The Z-Man.

Zenk joined the WWE (WWF) in 1986 and formed the Can-Am Connection with Rick Martel. Zenk & Martel competed in the opening match of Wrestlemania III defeating Don Muraco & “Cowboy” Bob Orton. The Can-Am Connection was groomed to be the successors to the then champions The Hart Foundation, but that ended when Zenk abruptly left the company.

Zenk bounced around Japan for a couple years after leaving the WWF/WWE before reappearing in the AWA in 1989. He competed in a Battle Royal for the vacant AWA World Heavyweight Title but was the final man eliminated seeing Larry Zbyszko win the belt instead of him. He worked a program with Zbyszko where he had several matches for the AWA title before leaving the company once again.

Later that same year (1989), Zenk debuted for World Championship Wrestling as “The Z-Man” at Clash of the Champions VIII. He soon formed a tag team with the late Brian Pillman where they won the NWA United States Tag Team Championships. During his time with WCW he also captured the WCW Television Title defeating WWE Hall of Famer Arn Anderson. Notably Zenk held the title at the time WCW parted ways with the NWA, making him the last NWA TV Champion and the first WCW TV Champion. Zenk also was a one time co-holder of the WCW Six-man Tag Team Championship along with Dustin Rhodes (Goldust) and Big Josh (Matt Bourne/Doink the Clown). He was eventually released from WCW in 1994.

Following his release from WCW, Zenk went back to Japan competing with All-Japan Pro Wrestling, and eventually retiring from the sport in October of 1996.

His obituary that was published by the Star Tribune can be read below:

Report: WWE Might Be Planning Major Push For Kevin Owens

AEW Threw Jake The Snake Roberts His First Ever Birthday…

Report: WWE Might Be Planning Major Push For Kevin Owens

AEW Threw Jake The Snake Roberts His First Ever Birthday…