At last night’s WWE Live Event in New Delhi, India the highly advertised main event of the evening saw former WWE World Champions Triple H and Jinder Mahal doing battle. Triple H picked up the win over Mahal last night in front of a what was said to be a sold out crowd. 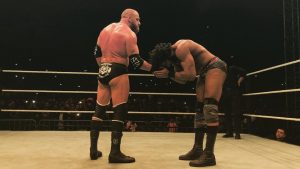 After the match WWE and Jinder Mahal both commented on the match on twitter:

Thanks #WWEUniverse India for a night I will never forget. Regardless of the outcome it was one of the greatest nights of my life. Hats off to @TripleH, nothing but respect. @wweindia

"Many people may criticize you, many people may hate you for no reason, but know this, you have EARNED my RESPECT!" – @TripleH to @JinderMahal​ at #WWEDelhi pic.twitter.com/JjUQ7ic8E6

Does WWE Want Eddie Edwards When His IMPACT Deal Expires?

AEW World Championship Match Announced For ALL OUT

SPOILER: Identity Of Big Special Guest For Next Week’s…