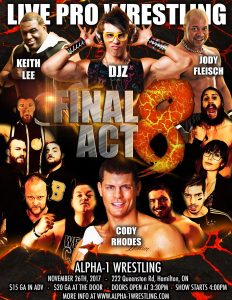 Gregory came out limping and holding an IV that was attached to his leg. He got on the mic, made a announcement and said he can’t wrestle due to a groin injury and he found a replacement. Sabre watched the curtain awaiting his replacement and nobody came out until Gregory Iron swerved ALL of us including Shane Sabre by attacking him from behind. Shane Sabre got a pretty quick spear on Gregory Iron for the 1, 2, 3 & now your NEW Zero Gravity Champion, “The Wrestling Jesus”, Shane Sabre.

Good match. It was pretty chaotic. In a TOTAL SHOCK, The Western Med Connection won this match. Fans were in SHOCK including me. Some fans of Dr. Dan. were chanting Dr. Dan and were happy they won.

Del Bruno was being cocky – blow a kiss to the color commentator or someone else, 1 finger for the pin on Jade Chung to which she kicked out,etc. during this whole match but he got SERIOUS towards the end. It was 1 HELL of a match. Jade Chung did Josh’s roaring elbow on Del Bruno. Del Bruno won by pinfall, sadly. Jade can hang with the guys in Alpha-1 Wrestling.

It was supposed to be Jody Fiesch in this match but he had a knee injury during the Fatal 4 Way match featuring Jody & DJZ @ AIW last Friday night so Gringo Loco took his place. Jody was supposed to appear and addressed the crowd but he didn’t. What a MATCH! Fast-paced, exciting and lots of aerial lucha libre maneuvers as well. DJZ did pick UP the victory via pinfall. It was indeed 1 of the MATCHES OF THE NIGHT.

Great Triple Threat match. Keith Lee is a BEAST. Saw him in person and he looks like a BEAST. Curt took advantage and pinned Alex Daniels for the 1, 2, 3 and he got the victory. After the match, Alex Daniels got on the mic and said that he is NOT going to retire and loves to come back to Alpha-1 Wrestling for the fans which got Curt “The Lone Star” Stallion pretty upset and attacked him from behind. Fans booed Curt heavily. Poor Alex Daniels here. 🙁 =(

If Ethan Page wins, “The Walking Weapon”, Josh will NO longer be the GM – General Manager Of Alpha-1 Wrestling. Lots of hugging between “All Ego” Ethan Page & Cody Rhodes. Cody did called it right down the middle. Ethan Page retained the Southside Heavyweight Championship with a little assist from Cody Rhodes. After the match, the fans sang Goodbye to Josh. Cody raised Ethan’s hand in victory until Cody turn on him and attacked him from behind, got on the mic, decided to dissed Hamilton, Ontario Canada who he gave appraisal to,etc. Fans booed on Cody heavily and Ethan got on the mic afterwards saying that he got rid of The Virus/Josh Alexander and now he will prove that he is the STAR in 2 Stars. A NEW feud in the works between Cody Rhodes V.S. Ethan Page on the horizon. We shall see.

Don’t know the order of entrants tho? But Cody Rhodes was entered in this match until “All Ego”, Ethan Page came  in the ring and attacked Cody Rhodes and got him eliminated out of this match. They fought outside of the ring and in the back,etc. Space Monkey was the FINAL entrant until he got attacked by a masked entrant. The mysterious masked entrant was the winner of the Over The Top Rope Rumble. He got on the mic and removed his mask to be revealed as… Stokely Hathaway and is STILL the Outer Limits Champion.

This was really… A FIGHT FOR SURVIVAL between the challenger, Rickey Shane Page & the Undefeated Alpha Male, Diamondtiger Kobe Durst… and for the Alpha Male Title as well. A wooden table, ladders and chairs… oh my! A superplex on the ladder from RSP to Kobe. Piledrivers galore from Kobe & RSP which they both kicked out of btw. The finish of the match was when RSP – Rickey Shane Page reversed powerbombed Kobe into the wooden table and pin him 1, 2, 3 and is your NEW Alpha Male Champion. The place went nuts. The Rickey Army was sitting front row and was extremely happy Rickey Shane Page wins the Alpha Male Title for the very 1st time.

Overall, it was a pretty AMAZING show from top to bottom. Probably 1 of the best ALL around show I’ve seen in Ontario all year LONG. Nothing stale on the show, everything top level entertainment. They kept such a pretty good pace and time to these shows, 9 matches in just under 3 hours. Some matches were pretty short tho but that’s OK. The LAST Alpha-1 Wrestling show in Hamilton, Ontario Canada for this year, 2017. Next Alpha-1 Wrestling show is on December 17th in Oshawa @ The Polish Hall.

Drew McIntyre Injured, Out Of Action For Extended Period Of Time